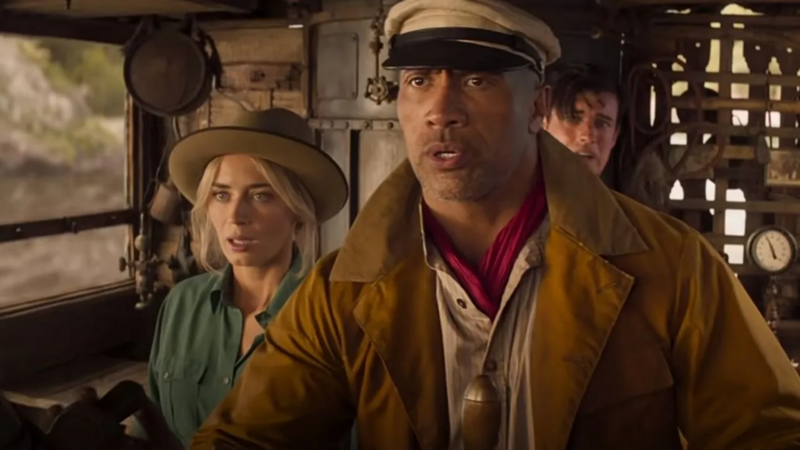 Ever since this film was announced I've been wondering how Disney could make a feature length film based on their Jungle Cruise park attraction. On the ride, guests take a ten minute cruise on a tour boat while a cheesy tour guide cracks dad jokes and points out animatronic sights. How on earth does that get turned into a two-hour movie with a $200 million budget?

The story begins as Lily Houghton (Emily Blunt) and her brother MacGregor (Jack Whitehall) arrive in the Amazon in search of a guide who will take them into the bowels of the jungle. Through happenstance Emily meets Frank Wolff (Dwayne Johnson), who runs his own "jungle cruise" tour service. Lily has arrived with a map and a stolen artifact that she thinks will lead her to the Tears of the Moon, a magical tree with magical powers. Unknown to Lily, Wolff spent years searching for the magical tree himself, but gave up hope of ever finding it.

It doesn't take long before multiple groups of bad guys arrive. Chasing her is Prince Joachim, a German aristocrat who also seeks the tree (and his artifact back). Chasing him are a group of undead zombie Spanish soldiers from the 1600s who were also in search of the tree and were cursed to remain in the jungle forever. It's a long story that unfolds throughout half a dozen flashbacks.

Along for the ride and generally useless is MacGregor, Lily's brother. In a bit of role-reversal, Lily is the Indiana Jones/Lara Croft character while MacGregor is the effeminate one who arrives with too much luggage and a complete lack of survival skills. Halfway through the film MacGregor has his "coming out" scene which doesn't advance the plot in the slightest, but it's 2021, and that's what we're doing at the moment.

The plot of Jungle Cruise is a stone's throw from Raiders of the Lost Ark, and like the Crystal Skull, the path up the Amazon leads to CGI-ville. The film starts out honest enough, but halfway through the movie a bunch of undead CGI zombies team up with a CGI snake to attack our heroes as they stand on a CGI boat protected by a CGI jaguar. I get it -- computers can do a lot of neat things -- but once the boat pulls away from the dock it feels like the actors were hoarded into a big green room, where the rest of the film was made. All that CGI action leads to a lot of Transformer-itus, with cuts so quick in jungles so dark that it's tough to tell who's stabbing whom.

The Rock does a good job of holding down the fort with his goofy one-liners, but a romantic connection with Emily Blunt is nowhere to be found. The two come off as bickering siblings more than an Indiana Jones/Willie Scott pairing. Jesse Piemons as the German Prince Joachim steals every scene he's in; on the flip side, the Conquistadors are interchangeable and mostly anonymous. As the source of their curse was revealed, it was all I could to shrug my shoulders.

Jungle Cruise comes close to wearing out its welcome at 2 hours, 7 minutes. There were a few twists I didn't see coming, and even though there's nothing ground breaking here, it's a fun enough ride that you'll be ready to exit by the time it ends. Keep your arms and legs inside the ride and the buttered popcorn flowing and you'll arrive at your destination just fine.
"Jack Flack always escapes." -Davey Osborne
Top

Thanks for reviewing this one. I honestly recall enjoying the ride at Disney World but recall thinking others probably thought it was boring. That is probably my main reason for interest in this movie. I feel like just concentrating on cool and realistic effects of the river ride itself would be a lot cooler than all this CGI mess you describe.

Sounds like a movie to watch when it plays on the TNT channel or something next year.
Top

Did Disney check all the social boxes? Was there an environmental woke aspect to the....moon tree?

I think what's worse is it's going to date all these movies. I think when people look back on film in 50 or 100 years they'll go, "oh yeah, that was the PC character era." My kids used to love iCarly, the Nick show where Carly and her friend Sam put on a web show. Nickelodeon is rebooting the show and the actress who plays Sam is not returning so they've replaced her with a new character who is black and gay. There's nothing wrong with being black, gay, or both, but the minute I heard they were replacing a character I mumbled "let me guess" and I was right.
"Jack Flack always escapes." -Davey Osborne
Top

The movie was set in 1916, when homosexuality was an aberration and illegal. Would this be an example of rewriting historical attitudes based on modern attitudes?

Know what, I don't really want to open this worm can because it can lead nowhere good. Its just a movie and I've been reading the news about non pronoun people
Top
Post Reply
5 posts • Page 1 of 1