According to Dan Aykroyd, two things inspired him to write Nothing but Trouble. The first was an incident in which Aykroyd was pulled over for speeding through a small backwater town and was taken immediately to the town's court and put on trial. The second, according to Aykroyd, was that he had an image of John Candy in drag and through the the idea was so funny that he decided to write a movie around it.

Nothing but Trouble has other obvious influences. It's a little Rocky Horror Picture Show, a little Ghostbusters, a little Texas Chainsaw Massacre and a little Beetlejuice with a sprinkle of Little Monsters on top. More than any of those things, Nothing but Trouble is one of those movies where somebody controlling the purse strings along the way should have just said "no." Like, I imagine whoever was responsible for reviewing the dailies just didn't go to work for six months and lied to his boss saying the film was going okay.

Financial advisor Chris Thorne (Chevy Chase) agrees to give a ride to attorney Diane Lightson (Demi Moore) and two friends to the Jersey shore. During their trip, the four take a detour through a backwoods town where they are pulled over by Sheriff Dennis Valkenheiser (John Candy) and taken to see the local judge, Judge Alvin Valkenheiser (Dan Aykroyd). Judge Valkenheiser is a bizarre looking creature, The "courthouse" is a spooky house full of tricks, and the four are sentenced to spend the weekend in jail which they enter through a trap door in the floor.

Later that evening the four are invited to join the Judge and Sheriff for dinner, along with a few others including the judge's mute granddaughter, Eldona (Candy, in drag). At dinner it is suggested that if Chris would marry Eldona, the group would be freed from this kooky situation.

Just how kooky is the situation? At one point, the band Digital Underground is arrested and brought to the courthouse. While there, Humpty, 2PAC, and the rest of the band break into song, at which point the judge reveals a hidden pipe organ and joins in. 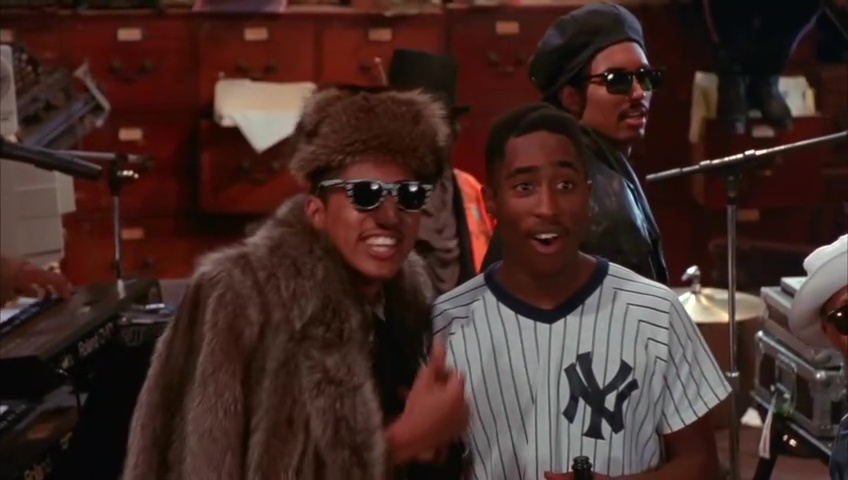 I mean... this is not a normal movie. This is very, very far from a normal movie. Like, this is a movie with a five minute scene of John Candy in drag serving limp sausages for dinner to Dan Aykroyd who (and this is true) specifically requested that his nose be made up to look like a penis. 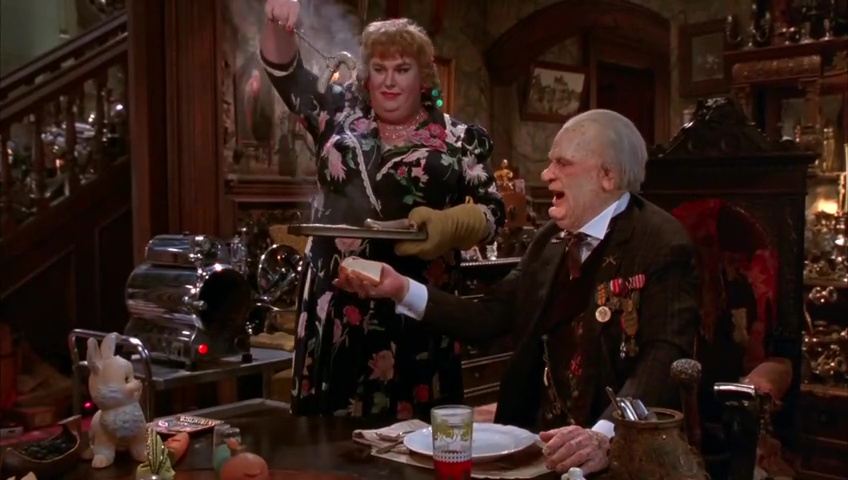 Most of the movie revolves around Chase and Moore's characters trying to find a way to escape, but they are no match for the judge's house full of tricks. There are trap doors, cages, moving hallways, slides, and barred windows. Other than that, it's a pretty normal house. Oh, except for the giant man-baby named Bobo that lives in the basement. 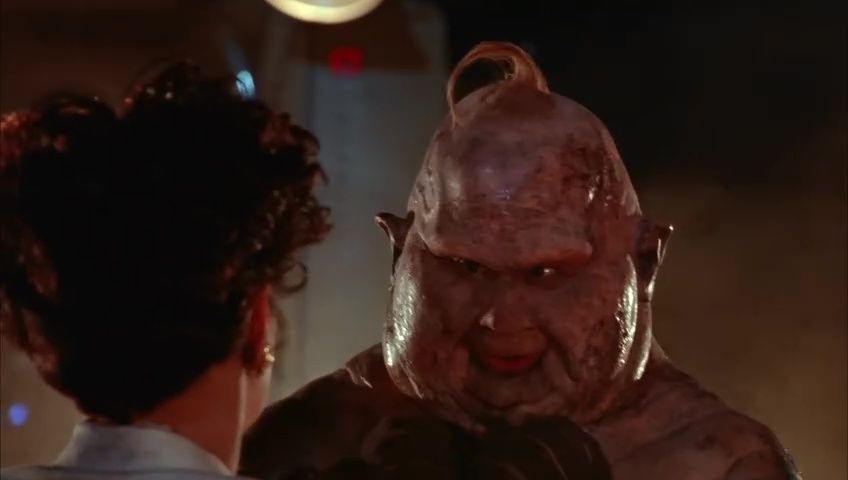 According to IMDB, Nothing but Trouble had a budget of $40 million and brought in around $8 million at the box office. Aykroyd, who wrote, directed, and starred in the film, wrote letters of apology to everyone who worked on the film after its release. Chevy Chase was such a pain in the ass on the set that he and Aykroyd never worked together again. This was also the last time Aykroyd worked with John Candy, and the last time Chase worked with Candy.
"Jack Flack always escapes." -Davey Osborne
Top

I remember going to the theater ti see this, based on the SNL names of Chase, Akyroyd and Candy. It was quite bizzare. The only takeaway was 1): never use cocaine, it leads to poor movie making decisions, and 2): there really is a town that's been sitting on top of a coal fire for fifty years.

Oh, and I've never liked rap or hip-hop, but I knew that before I saw the movie
Top

Chase seems like he's exhausting to work with. I have watched a lot of stuff regarding the show Community and he's a guy that needs to be the center of attention, didn't want to work the hours "required" to make a tv show each week (which, Christ, when I am Chase's age I hope I'm not working those hours either) but also possesses a dry sense of humor and can't take anything seriously and likes being shocking and "in character" all the time. He'd be perfect for this BBS.
the dark and gritty...Ice Cream Jonsey!
Top

Does anyone remember seeing the HBO short 'On the set with the Three Amigos'?

There was a clip of Chase bitching out his assistant about some medication. He could be quite the asshole.
Top

Chevy Chase was acting like a primadonna dick when he guest hosted SNL in 1978 and Bill Murray punched him in the face. Did you know Chevy Chase is banned from SNL because he was such a dick? I know Kevin Smith once met with him in an attempt to reboot Fletch and cancelled everything after their first meeting. It's not hard to find bad stories about Chevy Chase on the internet. What's hard is finding people who have nice things to say about him. Even when people compliment him they say things like "yeah he's really funny once you get over him hurting your feelings every 30 seconds."
"Jack Flack always escapes." -Davey Osborne
Top

The other thing I don't get is how Aykroyd has some bad experience driving and then is like OHHH I'll make a movie and then does so. Right now I don't have hundreds of ideas for games, but I had a bunch in the 2000s and 2010s. Like, I had a queue. And that's with a full time job and without literally millions of dollars behind me. It was a stupid premise, I don't know how he didn't have some weird shit ready to --

/looks at his costumes again

OK, this *was* weird shit.
the dark and gritty...Ice Cream Jonsey!
Top

Im guessing Akyroyd had a vision of the weird house with all the crazy people first and tacked on his arrest sequence as a way to get the protags into the situation. Everything was a mish mash, just like Modern Problems was
Top

Ice Cream Jonsey wrote: ↑Thu Aug 12, 2021 7:56 am The other thing I don't get is how Aykroyd has some bad experience driving and then is like OHHH I'll make a movie and then does so. Right now I don't have hundreds of ideas for games, but I had a bunch in the 2000s and 2010s. Like, I had a queue. And that's with a full time job and without literally millions of dollars behind me. It was a stupid premise, I don't know how he didn't have some weird shit ready to --

/looks at his costumes again

I think if you're a certain kind of creative person, story ideas come to you. I've had people tell me they could never come up with the idea for a novel and I literally come up with one every day when I'm in the shower. I literally have 10 ideas that are fleshed out enough to all be decent stories. (The time to write them all is a different problem.) And I think Dan Aykroyd is that kind of guy -- I assume he met a weird guy from France one time and was like, "huh, wouldn't it be funny if that guy weren't really from France but an alien?" Boom, Coneheads. The challenge comes in taking that idea from a 3 minute sketch and turning it into a 100 minute idea. It was Aykroyd's interest in the occult that kicked off the script for Ghostbusters, but you have to have more to it than one idea. So I can see "hey I got pulled over and went to a haunted house" as a 3 minute skit, but it's that 100 minute stretch that this movie struggled with. And I think -- and this goes for most films -- that if you're having trouble reaching a length and the middle is dragging, dropping a musical performance from a trendy band in the middle is not always the answer. It's rarely the answer. Can you imagine if two thirds the way through Jaws, someone said "this is borning!" and then Ted Nugent floated by on a raft performing Cat Scratch Fever?
"Jack Flack always escapes." -Davey Osborne
Top

...and then the shark ate him. THAT SOUNDS AMAZING.
Top

I would buy the extended, director's cut version of Jaws if Ted Nugent was attacked by Bruce.

THE
BEST MOVIE EVER
AARDVARK
Top

Flack wrote: ↑Wed Aug 11, 2021 8:22 am More than any of those things, Nothing but Trouble is one of those movies where somebody controlling the purse strings along the way should have just said "no." Like, I imagine whoever was responsible for reviewing the dailies just didn't go to work for six months and lied to his boss saying the film was going okay.

So, in other words, the film was nothing but trouble?
"You're motorin', what's your price for flight, when finding Mr. Right?"
- Night Ranger, Sister Christian
Top
Post Reply
11 posts • Page 1 of 1