Well, lawyers know all the rules, right? Maybe that could be a positive trait
Top

Now I am being real - where did I express glee that you were getting a hard time online? I genuinely don't think I have done that, but maybe I have.
the dark and gritty...Ice Cream Jonsey!
Top

In my Top 100 Songs List (the actual list, not the original fake list) RealNC called my first selection gay to which your response to that part was:

RealNC is always calling something or someone gay, what I tried to do here was make a comically ironic gesture by calling him gay for once. Also, he plays JRPGs which makes him gay by definition. But the only ironic thing (I'm pretty sure I'm using ironic incorrectly here, hopefully pinback can correct me) is that where you encourage his use of it here on others that you blow down on me hard for using it against him.

Also, on an unrelated but still very pertinent point, I am in sheer disbelief regarding the long string of abuse you've thrown my way as a result of me criticizing The Happiness Engine's idea. I never said that he is terrible or that all of his ideas are terrible, for the record I believe The Happiness Engine is a fine person with a tendency for great ideas and posts, I just found this one specific post to be terrible. I feel that you are looking at his original idea with rose tinted glasses so try rereading it through this post:


Maybe I am at fault here for not explaining clearly enough why it was a terrible idea? It would be like if you started a post asking for help fixing a bug and the first response you received was from somebody who normally makes really good posts and is a fine individual but this one time for whatever reason told you to just leave the bug in the game because once players discover this game ending bug that they will have a greater appreciation for the parts of the game that actually work.
Top

Of course it's a terrible idea. It's built around the "new game+" standard for RPGs, where your initial playthrough is to learn the mechanics and subsequent playthroughs are to really experiment with what you've learned, increasing replayability.
Top

My counter to that would be that there needs to be some sort of mechanic in place for that to even occur and creating that mechanic was the goal of the op. Seeing 5 other characters doing super cool shit will only serve to highlight the uselessness of the gimped class which in turn will merely leave the impression of an unfinished game.
Top

Shove it up your ass, Mays.
Top

ICJ already had to suffer the indignity of one well deserved I told you so today, please don't make him go through it a second time.
Top

Goddammit. As soon as I give Billy the benefit of the doubt, he takes a shit on the thread.
Top

Actually, Jiz is at fault here since he was the one who originally broke topic to attack me for no reason whatsoever. Had my last comment occurred before his, then his last comment would have been justified and I would of been the one at fault instead. This is the importance of recognizing time in relationship to event analysis.

Rather than attacking Jiz back, however, what I did was express skepticism that ICJ would respond even remotely similar to:

Which, by the way, these sorts of inconsistencies in his behavior are things he personally asked me to highlight the other day in this exact same thread making my response to the attack more on topic than your chronologically failing observation of it.
Top

Billy Mays wrote: ↑Fri Feb 22, 2019 3:21 pm ICJ already had to suffer the indignity of one well deserved I told you so today, please don't make him go through it a second time.

Isn't it more about being nice (or at least civil) to my friend The Happiness Engine than the deconstruction of his RPG ideas?
the dark and gritty...Ice Cream Jonsey!
Top

I've been nothing but those things towards The Happiness Engine in this discussion, if you're looking for examples of incivility then look no further than your own posts. I don't hold them against you since I know that you are normally a kind person going through a hard time right now, but you will one day look back on this thread in the future and realize that you were really out of line with the things you wrote. And when that happens, I want you to know that I forgave you for them.

In regards to deconstructing ideas, that is the very nature of civil discourse since placating an individual when you see fault in there ideas is the grossest form of insult.
Top

Can we ban Billy from this base so we can get back to the dev log?
In the yard, not too far from the car.
Top

How about for starters this class receives +1 to AC every five levels and +1 to IQ every two levels on top of whatever abilities you have listed? This would free up levels 9 and 10 for some more exciting perks or feats rather than just a stat dump?
Top

How about for starters this class receives +1 to AC every five levels and +1 to IQ every two levels on top of whatever abilities you have listed? This would free up levels 9 and 10 for some more exciting perks or feats rather than just a stat dump?

Good idea - I may be in the process of moving to a different (nearby) town which doesn't leave a lot of time for me to continue our tete-a-tete in the underthread but noting this as a thing to do sounds good. We want our Electrical Engineers to be a master of electricity!
the dark and gritty...Ice Cream Jonsey!
Top

Two thoughts on the Electrical Engineer, nothing concrete yet:

First, I feel their progression is a bit front heavy with utility so adding in at least one more flashy electrical attack of some sort very early in the tree would help liven up the class even more.

Second, remember these things from back in the day: 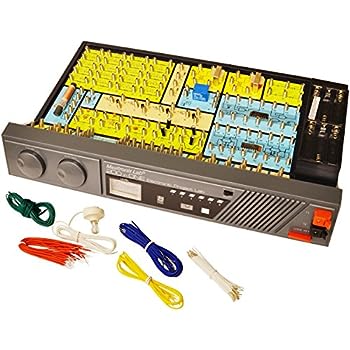 Electronic Project Labs, you should incorporate them into the game, they fit in with the retro vibe and could create some incredible puzzle opportunities. They could be the Electrical Engineer's starting off swiss army knife or incorporate it as an early to mid level quest item?
Top

Hey, I had one o them things! Built my first Fuzz-Face on that.
Top
Post Reply
37 posts