AArdvark wrote: ↑Mon Oct 21, 2019 4:12 pm A quick note on manners. The locals are very polite, the other torists tend to be entitled assholes. Well, maybe just snobs or something. Not full assholes but close.

Back when we were traveling - Connections was on PBS television in first run so it was 1979 - we stopped in a few places in Arizona after leaving Southern California, specifically Long Beach.

One time I had parked near downtown Phoenix and had walked over to a crosswalk on a major busy 4-lane city street, and was waiting for the traffic to clear. As a 5-year veteran pedestrian used to Southern California traffic, I "knew" that when you want to cross a street at the crosswalk where there is no traffic signal, you stand at the corner, on the sidewalk, then watch and wait until there is an opening, because the cars do not grant you any leeway, they don't even slow down and will probably run you over if you were in the street.

Well, you could have knocked me over with a feather, because, while I was standing there, on the sidewalk, the cars in both directions came to a stop. And not "slam on brakes" stops, regular smooth stops as if, all the drivers approaching thought, "oh, it's a pedestrian waiting to cross up ahead, I'll treat the intersection as if it had a stop sign."

Breakfast at the Grand Canyon train excursion hotel. Theres nobody under 40 here. Scenic wonders must be for the middle-aged. They have the dining down to a science. Old people never smile. Maybe just old tourists never smile.

Its 35 degrees outside, a huge change from Phoenix, very nice. Should see all the huddled up old people not smiling. Im still in one of my Hawaiian shirts, jacked up on coffee and grinning.
There's a cowboy gunfight show before the train ride to another big hole in the ground. 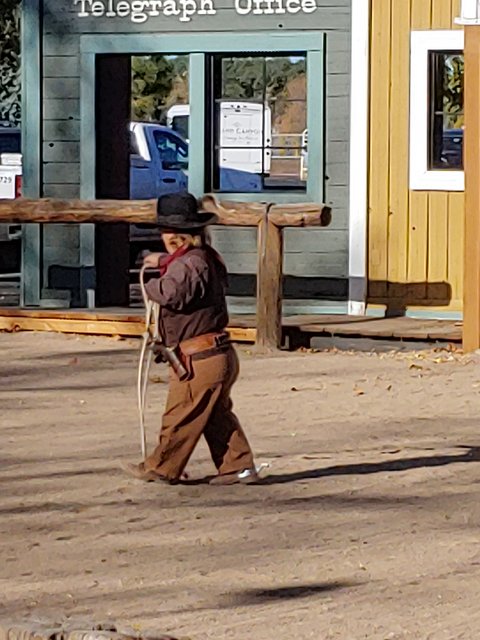 Midget cowboy rodeo show
Can life get any better?
Top 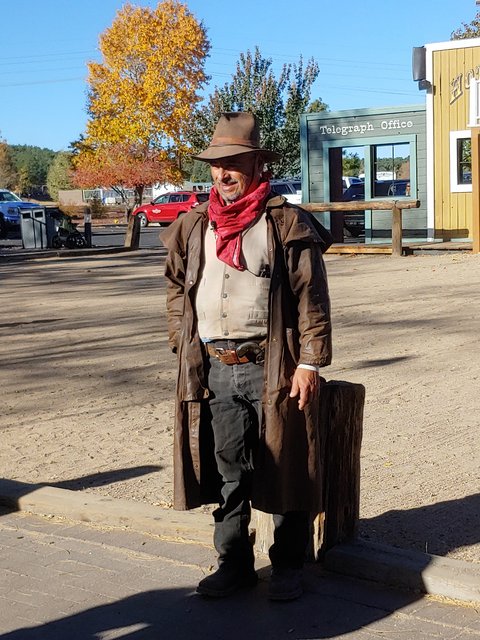 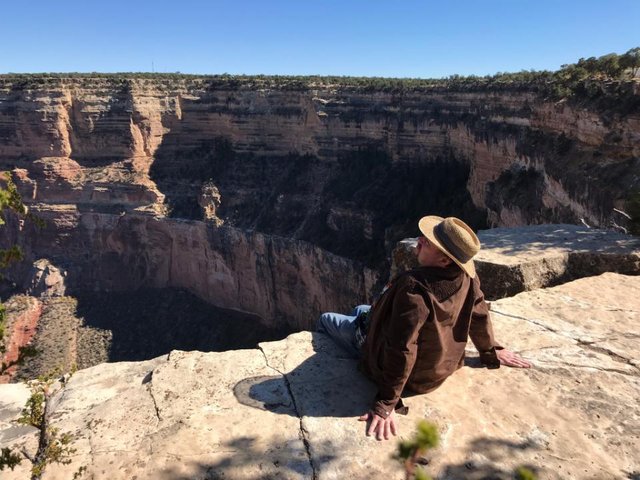 Not too close to the edge

Wife says it's ok, life insurance is paid up
Top 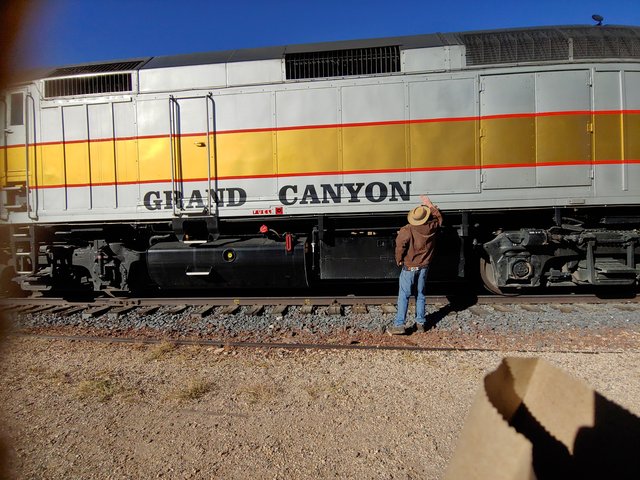 I've always wanted to be a trainspotter. 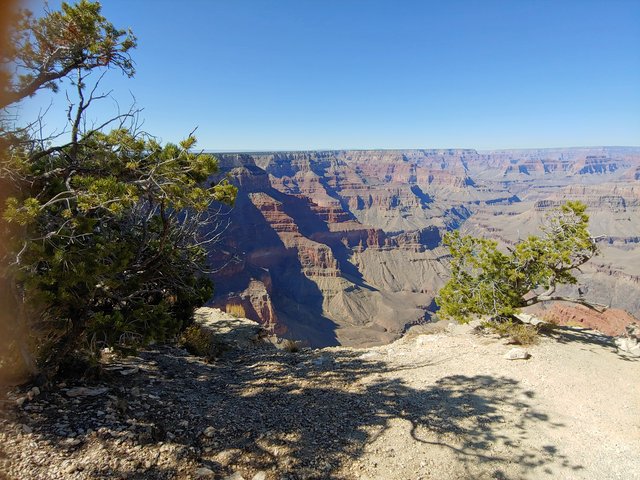 Awesome hole in the ground
Top 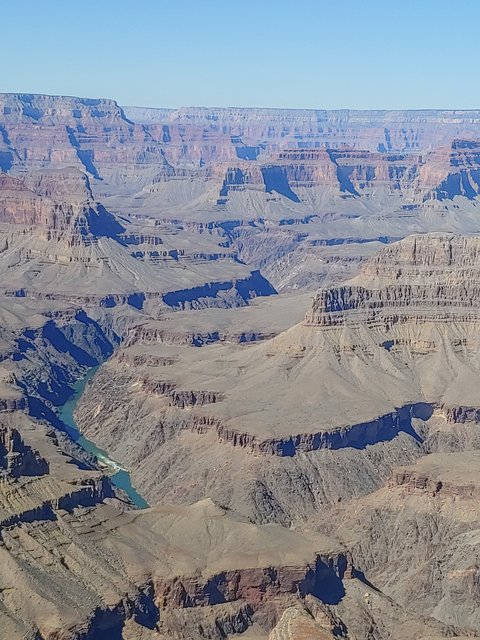 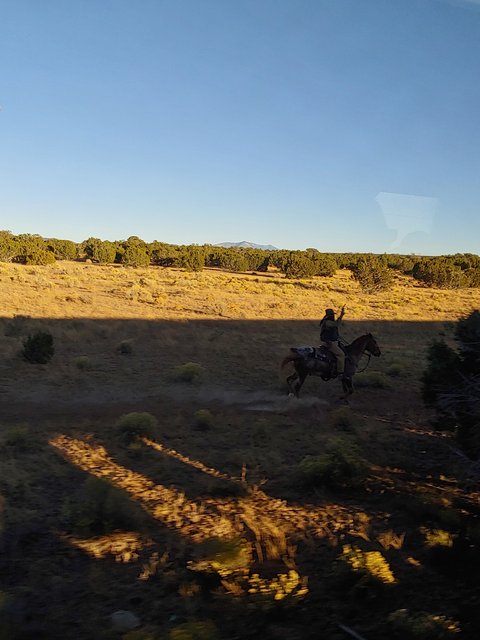 Well surprise surprise, there was a train robbery on the way back. Never had a midget cowboy train-rob me before. This is after I tipped the cafe car lady and the bus driver and the waitresses at the food place at the Grand Canyon. Was running out of small bills and they really weren't good enough actors for me to drop a ten spot.
Top

Im going to write up some real memoirs when I get on a full keyboard, i promise.
Top 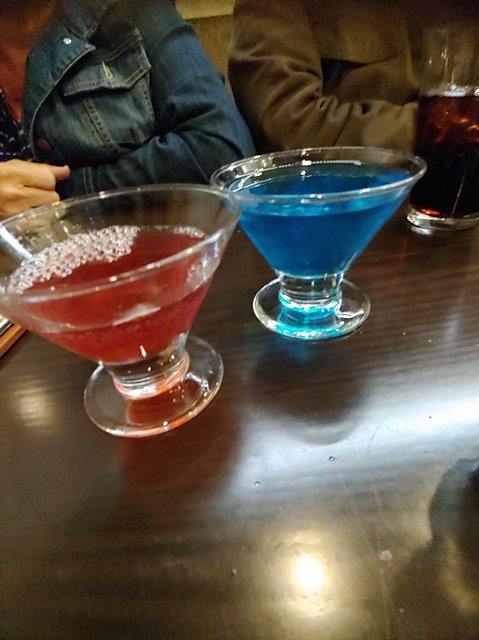 You cannot get good pizza or wings out here.

Steaks are to die for, the cattle must have been grazing on the pampas yesterday, they were so fresh. Pizza, not so good.

THE
C MINUS
AARDVARK
Top 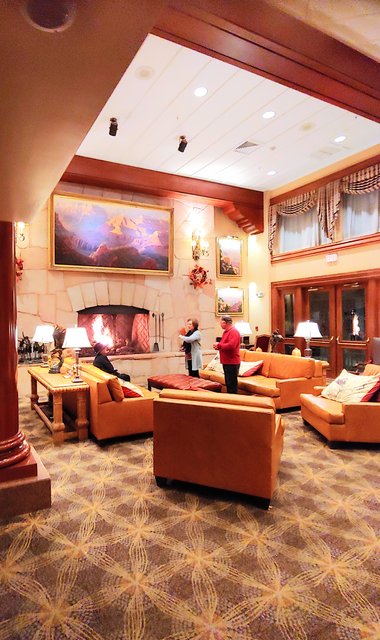 Hanging out, waiting for everybody to catch up on the way to the bar
Top 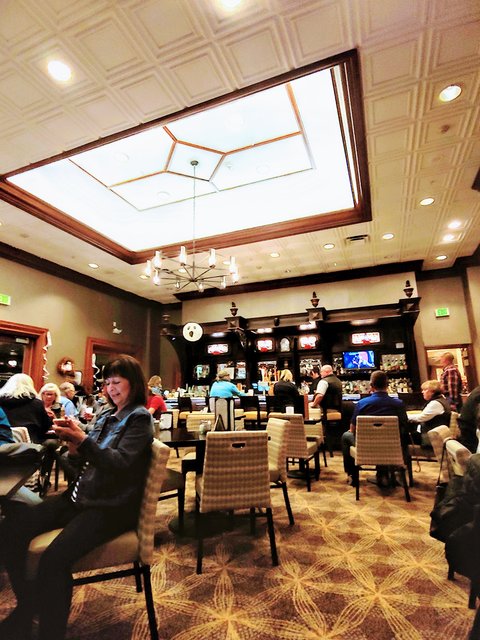 Yep a hoppin' time at the hotel. They were playing four handed Skip-Bo in the bar. Might as well have bingo, christ.

There was a country/soft rock guitar guy in the restaurant, oh boy. Good times never stop on a Tuesday night in Williams. The downtown was a half block long and closed around seven.
Might as well go to bed, it's so exciting.
Top

Those train robbers must have a terrible business plan. Same guys robbed us. You would think they would have enough to live off of by now. We had a five spot left over so I paid one of the guys to kidnap my kid at gunpoint. So times for the rest of us.

Here's a funny story for you. We took the same train to the Grand Canyon (did you eat at the diner that morning with the train that went around the ceiling?). When we got there, everybody (200 people? 300?) got off and went one way and my wife insisted the Grand Canyon "is probably the other way." So we followed her and then eventually had to stop someone and ask them where the Grand Canyon was, which is embarrassing. Turns out, the other 200-300 people were right, surprise.

We ate at a pizza place that night too and I remember it being "pizza" and that was about it.
"Jack Flack always escapes." -Davey Osborne
Top

Yep same Fred Harvey restaurant, same train ride. There was a bus tour at the canyon and the driver sounded a lot like Borat.

Did your train ride have a Train Car Cheerleader and a couple of strolling guitar players? The two hour ride each way was chock full of entertainment.
Top

I saw an episode of The Flintstones where they stop at the Grand Canyon, only to discover it's just a tiny little stream. Fred, somewhat disappointed, says, "the guidebook says this will be really amazing to look at in a couple million years."
"You're motorin', what's your price for flight, when finding Mr. Right?"
- Night Ranger, Sister Christian
Top

Bark, you should have tried the Grand Canyon rafting thing, its incredible.
Top

Sadly, we didn't have the time for white-water rafting. We did use the hot tub at the hotel, does that count?
Top
Post Reply
168 posts