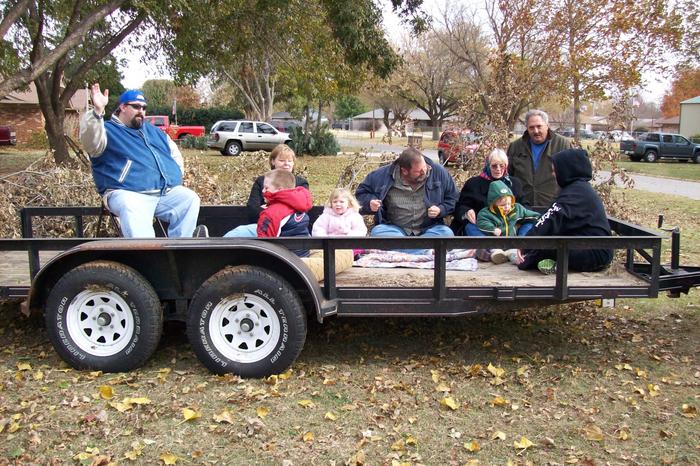 In the early-00s, my dad bought a flat-bed trailer. It's 16-foot long, almost 8-foot wide, and has two axles. He specifically bought the trailer to haul a car he bought, but I quickly began using it to haul arcade games home from auctions. Over the years, I added a metal ramp to the back, replaced all the wood, fixed the wiring for the lights, and paid for at least two sets of tires. His trailer has kind of became "our" trailer.

Although my family typically hosts the family Thanksgiving meal, in 2007 we had Thanksgiving at my dad's house. I don't remember what the exact inspiration was, but someone (my dad, I think) suggested that after we ate we should drag the trailer out of the backyard, hook it up, and take all the kids (and some of the adults) for a ride around the neighborhood.

It was 40 degrees and windy that day, and everyone was wrapped up in coats and hats. Everyone found a spot on the trailer to sit except for me, who decided to be funny and brought a metal folding chair. And while the chair was more comfortable to sit on than the trailer's wooden floor, it also boosted me up just high enough to catch the brisk winter wind right in the face the entire time. My dad pulled the trailer around the neighborhood at a walking pace. The kids love it. The kids still remember it.

The "trailer ride" tradition did not last very long. I think we did it three or four years in a row before the kids lost interest.

Like many people, we're having an uneventful Thanksgiving this year. My wife is cooking a turkey, stuffing, and all the things she normally cooks. Only my dad is coming over; he and I will be eating in my garage, socially distanced from the rest of the family. He will leave with enough turkey for one sandwich, and enough celery and onions for one omelet. We will end up with a month's worth of leftovers.

There are plenty of things not to be thankful for this year. I am not thankful for Covid-19, and how it has forced us to change the way we live, love, and celebrate. What I AM thankful for is that everyone in that photo from 2007 is still alive, and we're doing everything we can to keep it that way so we can celebrate together next year.