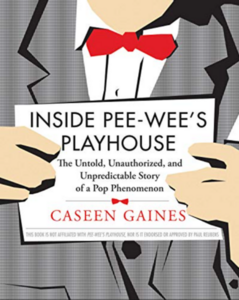 Although I vaguely remember his random guest appearances on David Letterman, my first real exposure to the one and only Pee-wee Herman was, like most of the country, though Pee-wee's Big Adventure. I was 12 years old when the film was released in 1985, and my friends and I thought the entire movie was hilarious. We saw it once or twice in theaters, and once I had a VHS copy of it, we watched it all the time. We memorized Pee-wee's monologues and repeated his catch phrases at school while impersonating his voice. Imagine, mid-high kids going around saying "I know you are, but what am I!" all day long. We even celebrated Large Marge's birthday in journalism class on the date that appeared in the film (December 5th).

Caseen Gaines's Inside Pee-wee’s Playhouse picks up after that, as Reubens downsized from the movie screen to the television screen with his Saturday morning television show Pee-wee's Playhouse, which ran for five seasons from 1986 to 1991. The book is not a Paul Reubens biography; the scope of the book is the television series, and for the most part it sticks to it.

The elephant in the room is that Paul Reubens did not contribute to the book (the author says Reubens his holding material back for his own eventual book). Instead, Gaines interviewed literally everyone you can think of that was involved in the creation of the show -- we're talking everyone from managers and directors to puppeteers and animators. It's a robust look at the show, but one can't help but think that Reuben's contributions would have added insight to some of the show's conflicts and creative decisions.

There may have been another reason Reubens chose not to participate. Multiple times throughout the book, he comes off as... not nice. This starts early on when the person who came up with the entire "playhouse" concept got edged out of the picture (and earnings). A year later after a dispute over money with producers at the end of the first season, the entire show moved from New York to California, screwing the production company out of almost a million dollars and tying up people's salaries for months. Time and time again, the people who brought the show and characters to life eventually get edged out of the show. Reubens' actions are a stark contrast to his Pee-wee persona; again, it would have been nice for Reubens to have defended himself. One particular bummer was the fact that Reubens and Phil Hartman had a falling out (Reubens felt Hartman used him to get his gig at Saturday Night Live). It seems that Reubens was quick to ask for favors and loyalty but didn't always reciprocate.

If you're looking for more information about Reubens/Herman's career, you might be disappointed. Pee-wee's Big Adventure, the movie that made Reubens' career, only gets a page or two of coverage. Pee-wee's second film, Big Top Pee-wee, gets slightly more coverage but only as far as how the negative publicity of a failed movie affected the television show. And then there was "The Incident," which also gets minimum coverage. As long as people go into the book knowing the scope is the television show, they shouldn't be disappointed. The book includes references to two movie scripts that have been publicly mentioned multiple times, one kid-friendly and one adult in nature, but to date neither of those have come to fruition. That being said, the book was published prior to the release of 2016's Pee-wee's Big Holiday, the Netflix film that essentially retracked the original film.
"Jack Flack always escapes." -Davey Osborne
Top
Post Reply
1 post • Page 1 of 1