Is the NFL really fixed?

All the sports have these problems. In the NHL, the penalties are called so they get as close to evening out by the end of the game as possible. That's annoying. If one team gets two power plays in a row, there is a one million percent chance that the other team will get the next one.

However, the problems are not nearly as glaring as in the NFL, where every weekend, during every game, and likely more than twice, there will be a call/non-call which is so outrageously wrong/against the rules that the only two conclusions are that they continually hire the most confused, worst officials they can find, or that the fix is in, not necessarily to ensure one side wins, but to make it as exciting/marketable as possible.

It's gotten so bad that I absolutely refuse to watch any NFL games until next Saturday.
In the yard, not too far from the car.
Top

I guess it is really only a game after all. But if there were these kinds of problems in a parcheesi tournament they would do something about it.

THE
BOARD GAME
AARDVARK
Top

All the games this weekend were within one score, except one. Where the Seahawks beat a team coming from the worst division in football by 12. On the road.

The refs not giving the Bills that extra touchdown because the dumb Texans player returning kicks didn't know he had to kneel to mark himself down would have made it 27-0 Buffalo. OH MY GOD PEOPLE MAY NOT TUNE IN as if there's literally anything else going on in sports.

There is a video out there from the 80s of the Rams kicking to the morons on the Saints at the time and the Saints never bothering to down the ball. Dude for the Rams picks the ball up and runs for a touchdown. Hahaha Saints, you dummies. Virtually the same shit happens this last weekend and refs are coming out of the stands to keep the games close.

It's like Goodell got yelled at by people buying ad time at the end of games and his solution to this wasn't to correct some of the dumb glaring shit that is going wrong with the league, which is:

That's the shit the NFL should be working to fix. But instead they are fixing the games ha ha I made a funny.

(Pinback is right about the NHL. My dad complained to me in the 80s that a penalty at the beginning of the game in hockey may not be a penalty at the end. The makeup calls for power plays is also bad.)

I don't know why nobody running these leagues looks at the kind of people that give up wrestling when they are 12 and think "man, better not go that route."
the dark and gritty...Ice Cream Jonsey!
Top

Ice Cream Jonsey wrote: ↑Tue Jan 07, 2020 6:49 am It's like Goodell got yelled at by people buying ad time at the end of games and his solution to this wasn't to correct some of the dumb glaring shit that is going wrong with the league, which is:

The NFL cannot do anything, develop anything, or improve football players. Depending on what you want to call it, the NFL is
* a cartel
* a street gang
* a partnership
* a membership organization
* a franchising agency.

Remember why Jules doesn't have that racist sign on his garage in Pulp Fiction? It's for the same reason the NFL doesn't develop football players, "because developing football players ain't its fuckin' business!"

The NFL is a membership organization whose businesses are
* the franchising of member football teams to certain specific geographic areas
* licensing of NFL trademarks including its name, shield, and the phrase "Super Bowl"
* sale of national broadcast rights to the performance of contests between its members (individual teams may have control over local broadcast rights)
* other ancillary revenues
* after expenses, paying individual members pro-rata shares of all of the above revenues

Development of talent is the responsibility of individual member teams. Since revenues are parceled out on an equitable basis (after expenses. each team receives 1/32 of NFL revenues) there is no penalty for bad or inadequate performance, and no reward for good or exceptional performance. While it may sound crazy to say it, the NFL is the perfect example of communism in action.
"Perhaps she'll understand, if you tell it to her, plain."
- Don McLean, Castles in the Air
Top

You saying the NFL are commies?
Top

They are also not putting up with this anymore.
In the yard, not too far from the car.
Top

The real question is, will Baltimore be putting up with it in the future?

Because there is no alternative, I read the headlines on the reddit forum for the NFL. It's everything a reasonable person hates about internet forums - dumb shit posters, awful mods, brain dead conversation and they (of course!) do the whole thing where they will ban people because idiots are calling each other names on the Internet, which is the dumbest thing in the world. Mods on reddit do that, I am convinced, because their fathers walked out and this gives them a modicum of control over their environment.

So with Baltimore losing, they are now in the dog house and there will be a week of posts by redditors where they find tweets about how awful Baltimore is.

I really want to make a kind of web application that gives me NFL news (and maybe one for baseball and hockey and PC games) that does something like lay out tweets from NFL insiders. We'd have to ban certain words because I don't give a fuck about the politics of any sportswriter and most of them have to make sure they let us know how woke they are. Retweets would need to be on or off on a per-person basis. Most guys can't handle retweets. I think Flack and Greg are the two people left on my normal Twitter feed with retweet access.

Anyway, something to consider for me the next time I get the desire to make a new sort of web portal. App. Page. Etc.
the dark and gritty...Ice Cream Jonsey!
Top

I don't want to sidetrack this, but there are a few free sites out there that will generate RSS feeds from Twitter accounts. You could, in theory, generate several of those (along with RSS feeds from news sites using NFL keywords) and funnel them into one target -- could be an RSS reader, could be a forum (there are phpBB plug-ins that will import RSS feeds into posts), could be a mailing list, could be a website. The world is your oyster, which is good news for everybody except Kylie Minogue.
"Jack Flack always escapes." -Davey Osborne
Top

This is the perfect response to the COVID/NFL thing.

I love Terron Armstead. Expresses his disappointment but isn't one of those lunatics stated that it's not REAL.

For the exact opposite, check out Adam Carolla's feed:

His ENTIRE feed is "Get it on" and the above sentiment ("do what they tell you") a thousand times. Adam Carolla is one of my very few comedic heroes, but I guess we always knew he was kind of a fucking idiot.
the dark and gritty...Ice Cream Jonsey!
Top

I signed up for a site that featured writers who write about the Saints. I was accessing the site via my phone just fine after subscribing. Tried to login through my desktop browser last night and got: 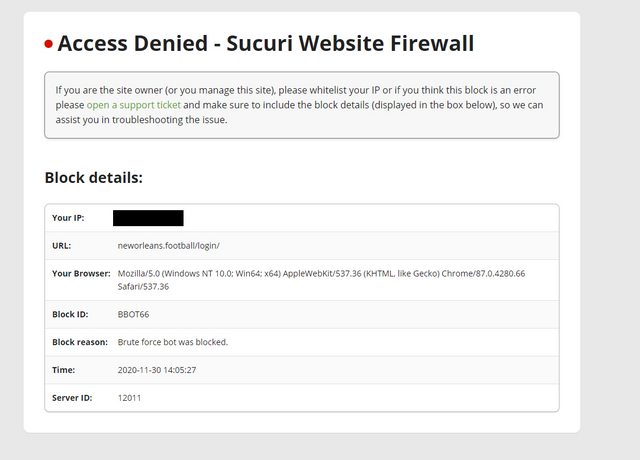 Tweeted the site about it last night. It's now 2:15PM in New Orleans and not a word and the website account is out there retweetin' people on Twitter. Soooooooooo I think we're good, I hit the cancel subscription button. It's a little scary that web infrastructure could get to the point where they are mis-identifying paying customers trying to login and there was no notification about it to anyone at any point passing 12 hours later.
the dark and gritty...Ice Cream Jonsey!
Top
Post Reply
31 posts