Thanks! Yeah that one cost me 700$. A bit higher than I wanted to play.. but it came completely all-original with a rebuilt Wells Gardner monitor. Also, my girlfriend really loves the game and wanted it.

It's kind of finicky. I've replace the fuse-holders as many recommend to do, but I've still got a little more work to do to get the rest of the quirks out.
Top

This has been great - it's been really nice seeing something like the new Rampage movie coming out and then bringing the nephew over to play it and see what inspired it.
the dark and gritty...Ice Cream Jonsey!
Top

Nice. I was playing Moon Shuttle, Pepper II, and Cloak & Dagger on mine last night after doing more work on Ms Pac.
Top

Right? You have now told me about Pepper II - I have heard it whispered for years, and now I can just go play it.

Jiz, have you ever played "Preppie"?
the dark and gritty...Ice Cream Jonsey!
Top

Jiz, have you ever played "Preppie"?

Pepper II is great man. I really dig the sounds and the music.. even the "zippity doo dahhh!!" when you clear a maze lol

And no I have not played Preppie but after reading about it I'm going to. Looks pretty funny. I never knew there were Frogger clones like that!
Top

Ok, I realized the reason I don't play this more is because with 1,000,000 games on it, you'd spend more time scrolling than anything else.

Does it support a favorites list?
the dark and gritty...Ice Cream Jonsey!
Top

Depends on what front end you're using. It looks like to me the default front in is Attract-Mode, which does support favorites lists. It looks like Button-A + Button-B toggles a game as a favorite, and then there's a game selection tab of just favorites.
"Jack Flack always escapes." -Davey Osborne
Top

I have been trying for months to find documentation. MONTHS! Where did you find this precious info? Can you share your findings!

Show me the receipts, Flack!!!!
the dark and gritty...Ice Cream Jonsey!
Top

Jizaboz wrote: ↑Tue May 15, 2018 7:39 am And no I have not played Preppie but after reading about it I'm going to. Looks pretty funny. I never knew there were Frogger clones like that!

The way things are, if any game becomes successful, there will soon be clones out. Maybe not even successful, maybe just heavily publicized. I seriously think if the developer hadn't dumped (almost all copies as) unsold inventory in a New Mexico landfill, we'd have seen clones of the game ET:The Extraterrestrial. All I can say about the potential developers of a clone of a game like that is, "may God have mercy on their soul."
"Perhaps she'll understand, if you tell it to her, plain."
- Don McLean, Castles in the Air
Top

Ice Cream Jonsey wrote: ↑Sun Sep 15, 2019 10:24 am I have been trying for months to find documentation. MONTHS! Where did you find this precious info? Can you share your findings!

Show me the receipts, Flack!!!!

The specific info I found is in the second link. The only hurdle is that it's spelled "favourite" which made finding it in Google a bit tough.
"Jack Flack always escapes." -Davey Osborne
Top

Those goddamn commies! Thanks, Flack. YOU are not a pinko commie.
the dark and gritty...Ice Cream Jonsey!
Top

Recently I decided that my setup was out of date after noticing a software release for Pi4. Bought a Pi4 kit, put the little heatsinks on and all, hooked it up aaand no video. I dunno if it is the HDMI to mico HDMI I am using (the Pi3 did not require this), a software issue, or what but I got nothing.

After hearing from our friend Chop tonight who made the custom Vectrex controllers, he was telling about how emu on pi3 vs pi4 has been a big deal lately. Apparently people are still working to make pi3 emulation timing correct for multi platforms. I notice that the software for pi3 has been updated a lot since I bought my ArPiCade with a SD card that contained basically 80% of the games I wanted.. had to manually download and transfer missing once then.

So I get the newest 3.X software for pi3 installed and wow nice menu layout! But I have no games. I had created a "clean" MAME 0.172 set last night. Loaded all of that into the 172 folder in the /boot "windows-friendly" folder on the SD card. Audio popping on MOST games but not some. Fuck that. Deleted all those ROMs from the SD (preserving the clean copy on my HD). Pulled a 0.106 set and created a clean set from it using the oldest version of mame that supported making ROM lists in the newer format (0.162) and Launch Box. Dumped all of those into the 0.106 folder on the SD card and loaded it up.. 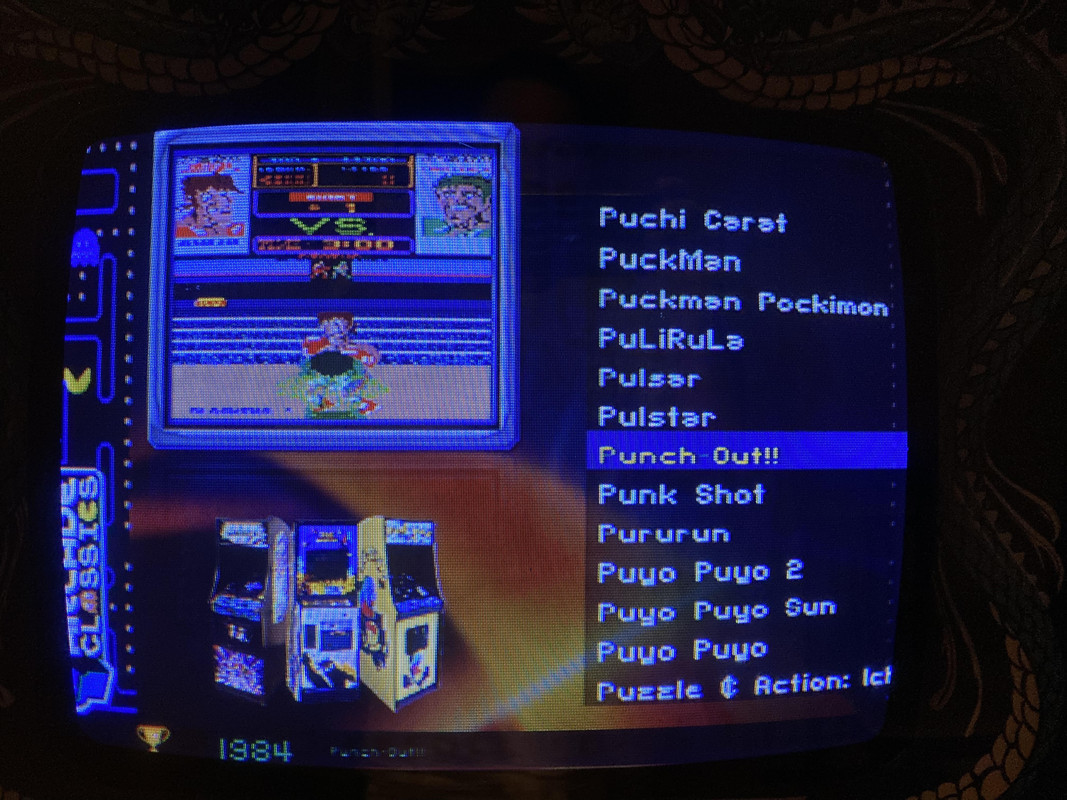 Games in this older ROM format of course always faster yet less accurate to hardware, but I was impressed with the other features that came with not only making my own, "clean" ROM set, but also the updates from the ArPiCade developer. Tons more playable games than before. Improvements too like Punch Out actually is playable! In the old software, you could only see the upper screen which was completely useless lol. Fruit games (video slots), console games, and other such crap not included. At this point the only tinkering I have left to do with the Pi3 version of this is..

- Add DAPHNE (Dragons Lair, Space Ace, etc) games
- Add some games that are not present in the older version of MAME that run smooth in 172
- Replace some games that run better in 172 (or another supported MAME version) than 106
- Maybe change the background layout of the main menu. I like the new one better than the original but I can probably find or make a cooler one for my arcade.
Top

Interesting! I bought a whole kit so I don't even know what version of what I have. For me, this was meant to be a "plug in once and never screw with it" solution and it's been that. I need to get some better wiring in place. I am using a keyboard for two much stuff like crediting up games and starting them.
the dark and gritty...Ice Cream Jonsey!
Top

Ice Cream Jonsey wrote: ↑Sat Jun 26, 2021 8:46 am Interesting! I bought a whole kit so I don't even know what version of what I have. For me, this was meant to be a "plug in once and never screw with it" solution and it's been that. I need to get some better wiring in place. I am using a keyboard for two much stuff like crediting up games and starting them.

If you bought the entire kit with the pre-loaded ROMS then you have exactly what I started with! I would keep that SD card in a safe place just in case you want to revert and buy another micro SD 32gb card if you want to try out new stuff. I can send you a copy of my SD card too after I get everything "perfect" for you just swap and try! And yes, the keyboard should only be plugged in to do things like enter service mode to run a software update which is rare. This new setup auto-scans all roms VERY fast upon boot every time unless you tell it otherwise unlike the old version.
Top
Post Reply
34 posts