I was going to do this in chronological order, but thinking it over the story of Xenophobe is an exhausting one. So I am not going to do that. I was going to try to take pictures of all the games working, but I am avoiding turning them on in the winter. But the Centipede cocktail is inside. So we'll start with that one.
the dark and gritty...Ice Cream Jonsey!
Top

Physically and otherwise!
In the yard, not too far from the car.
Top

I can't imagine moving something that heavy now. Except for my own body. SIGH.
the dark and gritty...Ice Cream Jonsey!
Top 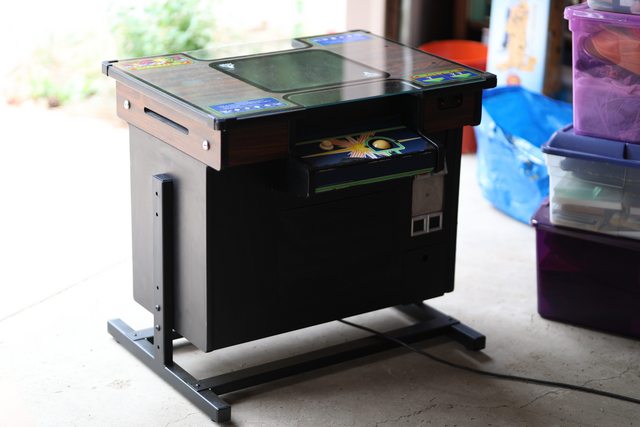 This is a cocktail machine that I bought on July 31st, 2020 from a collector a few exits away from me. We had my wife's father's truck at our house for some reason. This was during a very dead area of the pandemic where nobody went anywhere or did anything and nobody was getting vaccinated. There wasn't much to do in terms of leisure activity for a guy like me except for going on craigslist and wishing on arcade games.

The standup version is, of course, superior because it has that kick-ass side art. And I had one of those at one point. I sold it to the 1UP in Denver when I went to move in with my wife the first time. But this is still pretty fun - love the fact that I have two trackballs for it, the screen on this one is nice and bright, great sound. It's a nice game from the 80s and not a piece of crap like many of the ones I bought were when I first started collecting.

It's actually in our house right now and not the garage. I want to move it to the office, I just haven't had the willpower to do it. I wanted a game indoors during the winter as my garage is not yet heated. When my wife comes home tonight after working the covid clinic I am going to pour her a glass of wine, sit at the table and see if she'd like to go HEAD TO HEAD hrwehwerhwerhwerhwerhwerhwer.
the dark and gritty...Ice Cream Jonsey!
Top 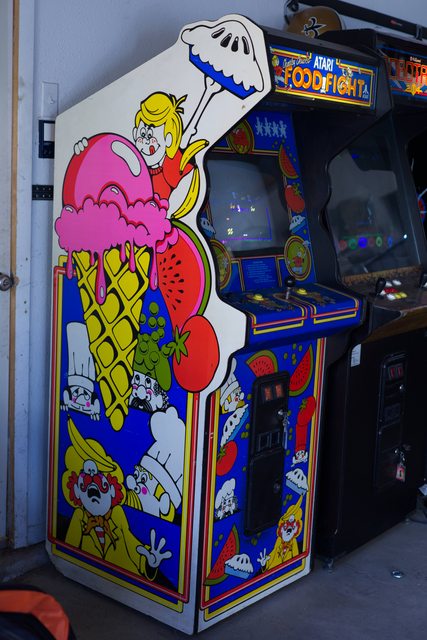 Food Fight has a lot going for it - that unique cabinet with the bright colors. The crazy concept (chucking food as missile weapons at the computer). The ultra sensitive joystick that is unique and analog - it has two pots on it, so you can stay in one spot BUT move the joystick and chuck food at the enemy chefs. At one point in the game there is watermelon out and there is an endless supply, so you can do this until the timer - which is in the form of a dripping ice cream cone - melts.

Oh yeah, and it also has instant replay if it thinks you had an exciting level.

OH YEAH, it also matches up the replay song to make it always end right as your instant replay ends. It may be 40 years later but that is still impressive to me.

I got this game, according to my records, on August 13th, 2013. I don't know if that's when it arrived or when I "bought it now" off eBay. I got it from a guy in Connecticut, I think. Shipped with no issue to Colorado. The only issue it's ever had is that there is plastic connector that wears out and a dude makes an aluminum one - https://www.basementarcade.com/More_Gimbal_info.html

I'm really happy with Food Fight, tough to see ever getting rid of it. When people talk about the different gameplay of 80s video games, this is a great example.
the dark and gritty...Ice Cream Jonsey!
Top

I counted and I have 18 if you include the pinball. That was more than I would have guessed. They multiply.
the dark and gritty...Ice Cream Jonsey!
Top

I am going to add to this. But I had to note today.

Guy came out and tapped into the abandoned breaker box that was in the garage. It had 240 going to it. I couldn't use it for anything!

He connected outlets to it.

I just ran all the games for the first time here.

1) All the games are working. Not perfectly - I have to put the new monitor in Mr. Do! - but they can all be played.
2) All the games can be on at the same time.
3) There are no electrical issues out there.

This is.... this is a rare time. Time to throw some parties.
the dark and gritty...Ice Cream Jonsey!
Top

This is absolutely wonderful news. I hate going through life not fixing things and then discovering how easy those things were to fix. I hope it didn't cost you a fortune, but what great news. It's party time!!
"Jack Flack always escapes." -Davey Osborne
Top

I did not! He was working for 3 hours. Had to get some parts at one point. I thought it was a good deal, what he charged.
the dark and gritty...Ice Cream Jonsey!
Top

You have 18 cabinets?
Top

Awesome! It was a lot of fun playing most of these when I was at yr old place.

It is a great feeling to see them all running at the same time. I'm still at "only" 4 complete games but yes, it's nice!
Top 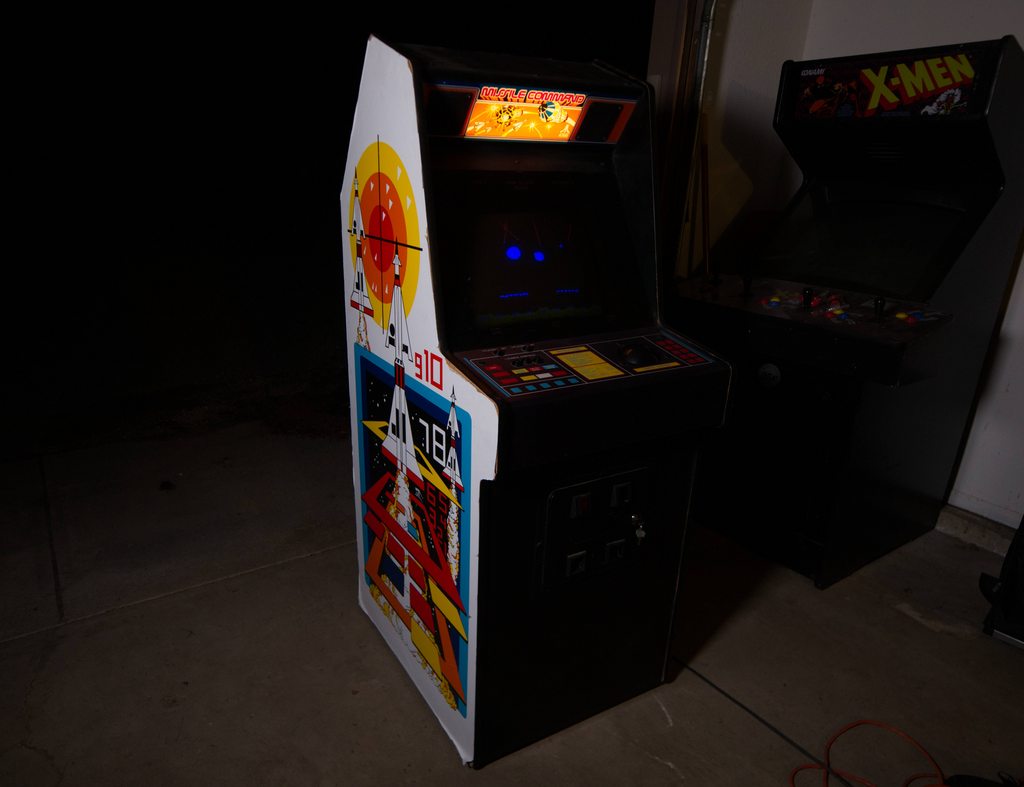 (I'm writing this in case I go back and read it later because I can never remember anything!)

I picked this up on Thursday. I was off work and unemployed and it was on location in Dillon, Colorado. I have been through the town on the highway (I've driven from Colorado to Las Vegas a few times) but never stopped. And it's a cute little down and I should have taken pictures of the mountains and forests that I passed. It rained as I entered Dillon and then rained the entire way back. I rented a cargo van from Uhaul, which is always easy thankfully!

There's a book called Missile Commander by Tony Temple, which is a great reference as to Missile Command's creation and all the high score drama that comes along with that game. It's a fun book and got me thinking about how Missile Command is impossible to fake in a real arcade setting, so it was on my mental list.

I can get past the first five boards, but I think that they really ramp up the difficulty after that. I am fascinated by the gameplay - I've read that some strategies include being ok with the fact that most of the cities will get nuked, and to focus on protecting one to the left of the center silo. I find myself getting a little too attached - sort of the same deal with Defender: because I want to save every little dude on the screen I save none of them and it's all over quickly.

This particular game also has the Super Missile Attack board installed, which I haven't spent much time with just yet. So that's something cool to look forward to. Mechanically, the game is fine, not the most gorgeous thing in my garage but not bad enough where I feel I need to buy new side art or anything. Missile Command has some gameplay qualities that make me think it's going to be around for a long time.
the dark and gritty...Ice Cream Jonsey!
Top