I have opinions about Chicago pizza.

I have opinions about Chicago pizza.

This is the thread to remind me to state those opinions. We were in Chicago for four full days and had three Chicago pizzas (though there, they just call them "pizzas".) So I'm an expert now.
In the yard, not too far from the car.
Top

Our first night, we decided to hit Lou Malnati's. We had previously had their pizza, but mail-ordered and frozen. It was great! For our honeymoon we'd gone to Chicago and had Geno's East. It was great! It's all great. But then we moved to Nashville, and started eating at "312 Pizza" in Germantown, TN, and we all agreed it was better than either of those two Chicago mainstays. But in fairness, we'd only had the frozen Malnati's, so let's try it fresh.

The walk to the Malnati's we chose took us right through the courtyard of the Trump International. I couldn't decide which was more sickening, that this building was allowed to still exist, with its gaudy, ridiculous, seditionist logo visible from everywhere within three miles of the river, or that there wasn't any graffiti or protesters or anything. Everyone there hates it, but it just stands there, charging $400 per night, like nothing ever happened.

Thankfully we regained our appetite in time to order the sausage deep dish:

I will always and forever come down on the NY side of the pizza argument, except for this, which was the best pizza I'd ever had. If your conception of a Chicago deep-dish is a casserole-like doughy, thick mess, this will cure you of that. The crust is this amazing, buttery, cracker-like thing which is just thick enough to hold a couple hearty layers of Italian sausage, mozzarella, and the tangiest, most perfectly balanced tomato sauce you've ever had. It's not a "Pizza Hut pan pizza but better", it's completely different, a lot lighter than you'd expect, and so incredible that nobody spoke during the meal except to utter a simple, reverent "Damn." Astonishing.

So, big surprise, our first Chicago pizza in Chicago was amazing. But if you look up "best Chicago pizza" lists, one name always bubbles to the top: Pequod's. It was inconceivable that anything could be better than this, but okay, a few days later we made the pilgrimage.

Malnati's at this point is a big ol' chain that's everywhere, while the vaunted Pequod's is still just this one place on the outskirts of town. We had very quickly become divested of our interest in driving anywhere, so this was also a great opportunity to learn how to use public transportation to its fullest. And we did. A quick jaunt on the "L", a simple bus transfer, a quick walk over a river, and there we were, at this hallowed ground, this Deep Dish Mecca.

Which brings us to the Pequod's deep dish with sausage and mushrooms: 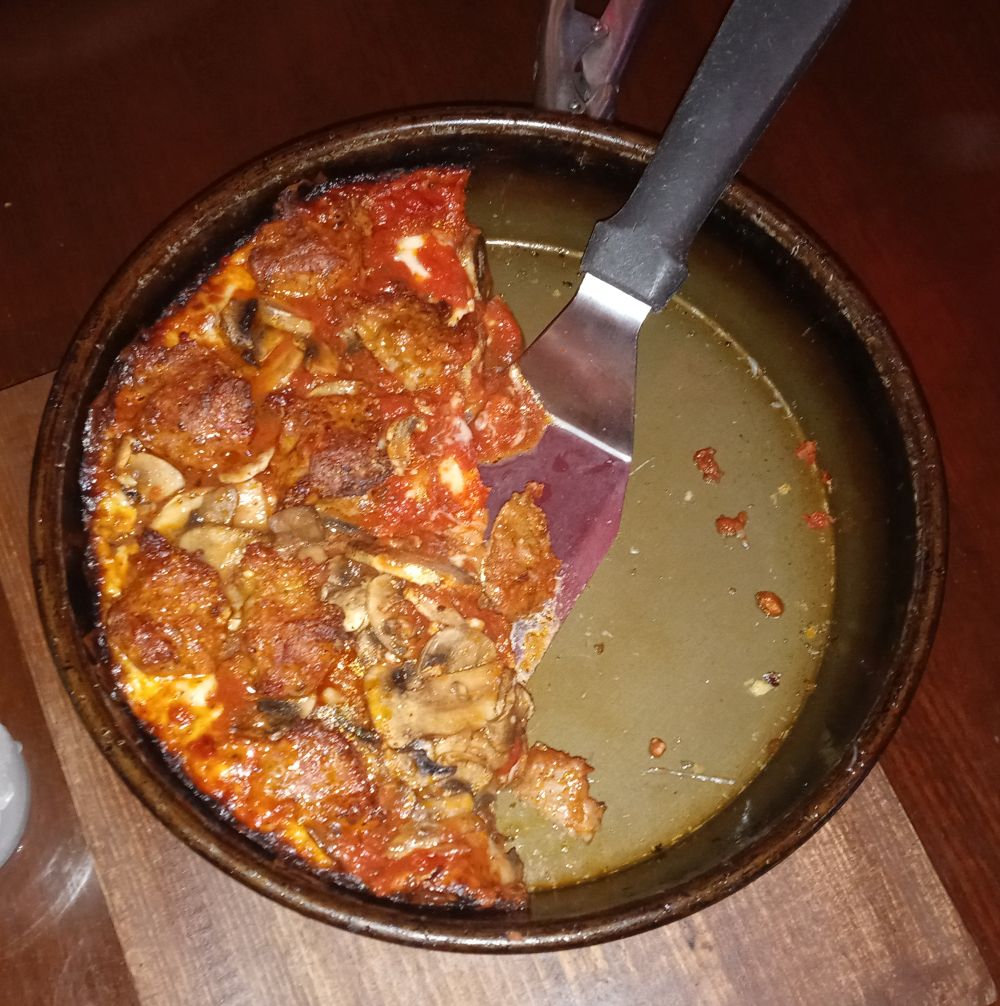 Notable differences here are that they do some weird thing with cheese in the crust so the outer layer caramelizes into this black layer of crust, and the toppings are on top, whereas at other places, they're at the bottom. We were speechless again for this meal, but this time because we were silently wondering how anyone thought this was better than Malnati's. Rather than the "toppings" being layered evenly under the sauce, here we just had big chunks of sausage and mushroom laid on top, so each bite had a different taste, and each bite was missing something. The buttery, cracker crust was replaced with this flimsy black thing, and the sauce lacked all of the richness, balance and tang we'd experienced just a few nights previous. Again, it was GOOD, nobody could say it wasn't GOOD, but in everyone's opinion, it was in neither the same league, nor same sport, as good ol' Lou's.

I enjoyed the evening, though, because we gained a sense of mastery over the Chicago Transit Authority, the trip was fun, the restaurant itself was very nice, and all that. We had no complaints about anything except, you know... the pie.

The very next night, our last night in town, we were talking about where we wanted to have our last meal. Everyone already having long since agreed Malnati's was the culinary highlight of the trip, we jokingly suggested, hey, let's just go back there, even though we just had pizza the night before. Ha ha! Then that look where you don't know if they're kidding, and then you both ask, and then you both admit you weren't kidding.

Now, over and over you will hear one thing about Chicago pizza: The deep dish stuff is for the tourists. Locals generally only eat the thin crust, or "tavern-style" pies. Having just had the heavy, challenging Pequod's the night before, this seemed the perfect opportunity to do a comparison, and it was instantly agreed, we would shuffle on through Trumpland one more time, and enjoy a Malnati's thin crust for our last dinner in town.

Personally, I think either plain cheese or sausage are the "correct"/best orders for Chicago pie, but Mina is a pepperoni fan, and she'd put up with enough of our shit, so sure, let's do a thin-crust Malnati's pepperoni for her. For us. For America:

If it was possible for anything to be better than the Malnati's deep dish, this is it, and the reason is that the crust is essentially the same, just doesn't come as far up the pan, and there is less of the other amazing ingredients, so everything is just as great, but the balance is different, and here's where that magical crust does its thing, because now it's front and center, and every bite has all of the tang of the sauce, all of the richness of the cheese and toppings, but also the hearty crunch, crackle, and buttery wonderfulness of that crust. Everything is great, and in perfect balance in every bite. Transcendent.

World-changer.
In the yard, not too far from the car.
Top

Christ those look amazing. I apologize if I have told this story, but when Melissa and I got Chicago Pizza in Chicago, the place we went to wouldn't take reservations, there was a line out the door, when we finally sat down we were at a .... raised(?) table between the bar and booths, and so close to the bar that some blonde who was third in line to get a drink had her HAIR almost get into our pie. Oh and to our right some old fat guy at a booth injected himself with insulin, raising his shirt up so everyone could see his gut.

The pie was fine but not better than what we have gotten at Wyman's 5 in Denver. I wish I could remember where we went. I'll ask my wife.

The pies you're taking pictures of look like the most incredible food on earth.
the dark and gritty...Ice Cream Jonsey!
Top

I think Giordano's is the place we went to. I was told it was 8 miles out of the city and in the suburbs. I screwed up our Chicago Deep Dish experience when we went. :(
the dark and gritty...Ice Cream Jonsey!
Top

We went to Giordano's by the Navy pier but it was an hour wait just to order. Later that night we got one delivered and it was pretty awesome 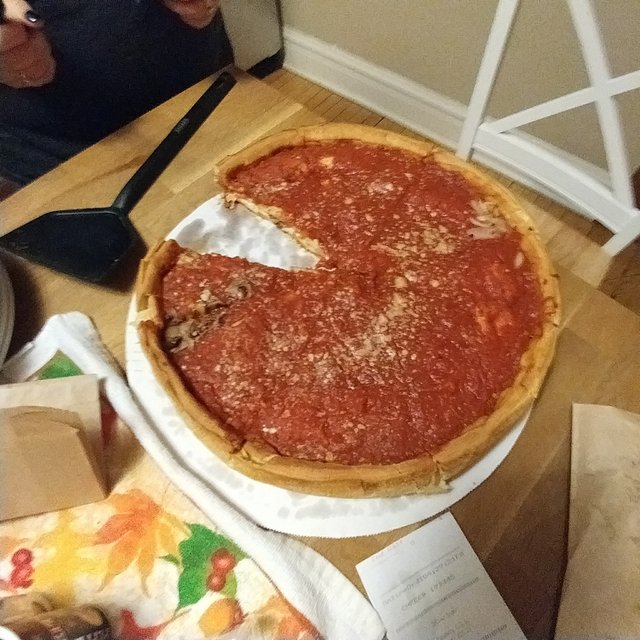