Magnum Dopus: The Making of Jay and Silent Bob Reboot (2020)

Magnum Dopus: The Making of Jay and Silent Bob Reboot (2020) 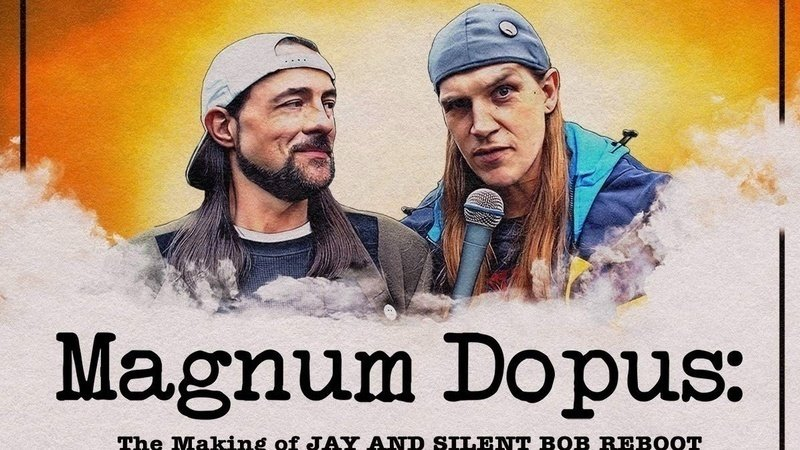 The making of Clerks, Kevin Smith's first film, is pretty well known to fans of the movie. The movie was filmed in the convenient store Kevin Smith worked at, he raised the film's $27k budget by selling is comic book collection and maxing out his credit cards, and launched both his career and Smith's intertwined world, the View Askewniverse.

While commenting on a special effects shot in Jay and Silent Bob Reboot, Smith points out "this shot cost more than my first movie."

Smith has found a way to make a living outside of the Hollywood engine. He does a dozen podcasts a week and makes a steady income from his followers. He owns multiple businesses, sells tons of merchandise, and goes on speaking tours that net him more than some of his movies. For 2019's Jay and Silent Bob Reboot, Smith circumvented the entire distribution process and instead booked showings in 80 theaters, where he showed the film and followed it with a live Q&A. Every show sold out and each show netted more than $85k. Smith is making Hollywood money without going through Hollywood.

Magnum Dopus: The Making of Jay and Silent Bob Reboot follows the director around the shoot of his latest film, beginning with Kevin Smith laying in a hospital bed after his massive heart attack. Unlike the silent character (Silent Bob) he portrays on screen, Kevin Smith likes to talk and talk and talk. This becomes clear during the documentary, as Smith gives speeches every time a new actor arrives on set, at the end of every day, during lunch breaks... pretty much any time a camera is near, Smith picks up a microphone and begins talking.

How much you enjoy Magnum Dopus depends a little on how much you enjoyed Jay and Silent Bob Reboot and a lot on how much you enjoy Kevin Smith. Over 90 minutes we get lots of brief clips of other actors talking and a whole lot of not-so-silent Bob. The documentary wraps with Kevin Smith talking to the camera and crying while standing in a parking lot after the sun has gone down, and I get the feeling that if he could find a tripod to hold the camera, he might still be there by himself, still talking.

Re: Magnum Dopus: The Making of Jay and Silent Bob Reboot (2020)

I really wanted to like Reboot and it has perhaps the most touching scene in his stuff but man, I had to skip around and fast forward parts. I think I'll like this better. Thanks for posting, Flack!
the dark and gritty...Ice Cream Jonsey!
Top
Post Reply
2 posts • Page 1 of 1